Compaction commences after mixing. Typically stabilised materials are compacted to 95% standard, however higher compaction standards are achievable. Insitu mixing up to 400mm in a single layer requires compaction equipment large enough to achieve density throughout a layer this thick. Typically large self propelled vibratory padfoot rollers are used initially for deep compaction followed by a similar smooth drum to complete compaction of the full layer. 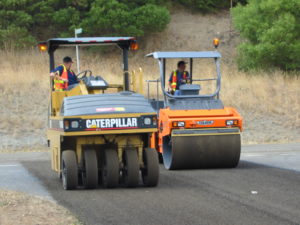 It is normal to commence trimming the pavement before the completion of the compaction operation, ensuring good bonding of any corrected shape before it is finished.